We had the opportunity to chat with Carlos Rosso, a talented Argentine architect with vast international experience and president of the Condominium Division of Related Group, the most important development company in Florida.

He tells us about how the company carries out its developments, the importance they give to art and the award he received from the Argentine Consul in Miami.

How do you think the products? Do they do it relative to the competition?

The main competition is ourselves. For example, while we were doing SLS LUX Brickell, at the same time we were building Brickell Heights and others.

We always think a lot about how to differentiate projects and how to position them. Following the example of the developments I mentioned, in one we offered branding with the SLS brand, the building has eighty-four suites, a restaurant, a bar on the corner and excellent hotel services. For its part, Brickell Heights is a different concept. They are two towers anchored by an Equinox, a three-story, 1,700-square-meter gym. In order to sell it more expensively, we decided to put a Botero in the corner and bring in designers of a higher level.

How do you organize the projects?

We have approximately seventy start-ups around the world. Ten are for luxury condominiums and we have thirty rental projects and as many for social interest housing. In 2015 it was the other way around, we had thirty luxury projects. We play with the product mix and with the zones according to the economic perspective. In 2008, a year of financial crisis in the United States, we did many things in Mexico and in the Caribbean. We also landed in Argentina with SLS Puerto Madero, a beautiful project that will be completed next year. With this project we were excellent, we sold at a record price and time.

Do you also develop social housing?

Yes, we are a company with a social conscience. We like to do luxury projects as much as this type of housing. We put the same desire in it and we always look for things that elevate the experience of the people who live in these buildings.

Does art have a great leading role for you?

We get very involved with this issue. What artist we put, what sculptor, what mural. In Brickell Heights, Fabián Burgos has done an incredible job painting a twenty thousand square meter mural. Art gives a lot of meaning to spaces. Urban space is urban if it has art and art gives meaning to that space. People are beginning to recognize buildings by the works of art they contain. At SLS LUX in the middle of Brickell, we put a Botero in the corner and people identify it as the Botero. This is one of our great differentials. People know that we always surprise, there is no brand that is more recognized than ours.

What are the latest buildings you are completing in Miami?

We are completing Auberge, Park Grove and the Paradise District. Park Grove is located in Coconut Grove. Distrito Paraíso is incredible, it is a mini city composed of four towers that have an incredible view of Biscayne Bay and it was recently inaugurated.

Do you have plans to do more projects in Argentina?

He has just received an award in the framework of Pinta Miami. What does it mean to you? 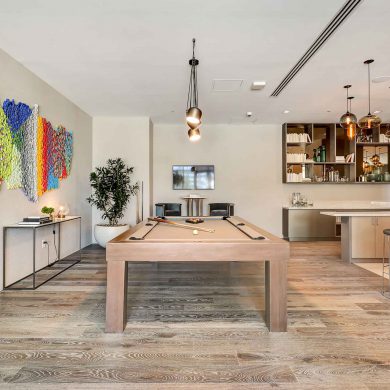